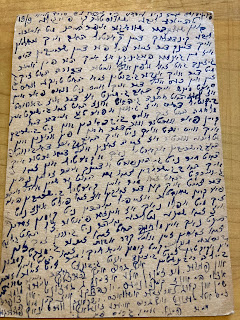 I found some such small postcards in a family document box that my brother gave me after my father passed away. They were written in 1940 by my grandmother's sister and sent from the small village in what was then Poland and today it is Belarus.

My grandmother immigrated here with her husband and my father who was two years old in 1927. She was a dentist, studied dentistry in Warsaw in the years when women were barely admitted to universities and continued to be brave and special in the years that followed.

She passed away when I was 16 and I had never heard of her sisters staying there. A year after these postcards were written the sisters, (apparently there were five sisters with families and small children), were no more alive. The small villages from which these postcards were sent were burned and destroyed with all the families who were there.

The postcards were written in Hebrew letters and the language is Yiddish. I learned German from my second grandmother so I could understand a little of what was written.

I wanted to know more and asked for help in one of the wonderful Facebook groups where there are people from all over the world who help translate everything in any language. An amazing guy from Belarus, who knows Yiddish even though he is not Jewish, translated the postcards for me.

Unfortunately the sisters from Belarus do not tell a story, they write in every letter that there is no need to worry about them, they are fine and have enough food and clothes. They do not tell of the difficult situation they had probably already been exposed to because a year later none of them had survive

But it gives me a tip of the iceberg, I have names of people, names of small villages, most of which no longer exist because most of their population was Jewish and they were burned and destroyed.

I keep researching and looking for who these people were that I knew nothing about but they will always remain a part of my family heritage. Unfortunately, there is no one to ask.

I think there is a deep and understandable connection to the fact that all my genealogical searches and that of so many people I see that started precisely in the year of the virus that has been here and all over the world, it is not just the free time that everyone suddenly had. It's something deeper related to existential anxiety, to the feeling that everything is so fragile and temporary. Family roots are something that binds you and gives you a sense of belonging, and in times of existential anxiety it may be the place to escape. Even if your family history is not the happiest thing in the world.